DroneSeed Wants to Regrow the World’s Forests With Drones

Trees are pretty great: they give us shade, timber, paper, and even food in some cases. On top of that (and most importantly), they help us breathe, scrubbing about 30% of annual carbon dioxide emissions from the air and replacing it with precious oxygen. But with rampant deforestation and the high resource and labor costs needed to replant all we cut down, we need a better way to regrow what we’ve lost. DroneSeed, a start-up in the Pacific Northwest, might have an idea that re-envisions how we interact with and utilize one of Earth’s greatest natural resources.

Earlier in 2015, Grant Canary (co-founder and one of DroneSeed’s four-person team) was trying to come up with ways to combat excess carbon dioxide in the atmosphere — the very same greenhouse gas that’s been speeding up climate change. While struggling to find a viable way to bridge, as he put it, the “two sustainabilities” of carbon and business, Canary decided to just start planting trees. It’s certainly a noble goal, but it isn’t as easy as one would think.

On an industrial scale, reforestation is a time-consuming process. Aside from the time it takes for the trees themselves to grow to maturity, laying the foundation for regrowth provides its own challenges:

“If you were to let a forest rebuild naturally, ‘it would take anywhere from 100 to 300 years,’ because forests go through what’s called successional stages: First pioneer species, like lichens and grasses; then small sun-loving shrubs like fireweed and huckleberry come in; finally seedlings of the trees the timber companies are after, like the Douglas fir, germinate and eventually grow to tower over the other species, dominating the forest. Herbicides speed up that process by making way for the bigger trees right off the bat.”

Depending on the trees and the purpose of the managed forests (some are used for lumber, others specifically to absorb carbon dioxide emissions), these centuries are rounded down to mere decades. But that speed doesn’t come without cost.

While herbicides act as catalysts, clearing underbrush to let tree saplings sprout easier, these same compounds are also poisonous to humans. One spraying mission gone awry two years ago over a small Oregon town had dozens of people coughing up blood and covered in strange rashes, symptoms of chemical exposure. The illegal dousing contained “a cocktail of herbicides containing substances such as triclopyr, imazapyr and 2,4-dichlorophenoxyacetic acid, better know as 2,4-D, an ingredient in Agent Orange.”

For those who lived prior to the Vietnam War, Agent Orange was used to clear the jungles of Vietnam and Laos; anyone unfortunate to be caught in the mist suffered a variety of cancers and diseases. Even to this day, some areas where Agent Orange was stored are deemed hotspots, having leached into the ground, poisoning food and people alike. Suffice it to say, it’s not the best chemical to be spraying nonchalantly near residential areas downwind.

The Rise of Precision Forestry

Canary wants to use DroneSeed to minimize these incidents while making the reforestation process more efficient and less resource-intensive. Calling it “precision forestry,” the drones will be able to take care of each step, watching over the forests like mechanical wood nymphs from the myths of old. “Our drones are pretty neat,” Canary said succinctly in an interview with GeekWire. “They have the ability to deliver seeds or spray, but our best bet is on our ability to determine ideal planting sites down to centimeters, assuring tree survival and growth.”

Rather than blanketing acres upon acres of clear-cut woodland with herbicides that could easily drift off course, DroneSeed wants to hone in on areas that are ripe for replanting. From there, the drones can also monitor growth, environmental conditions, and other metrics needed by forestry companies to stay in line with state reforestation mandates.

Washington state, for example, requires 190 healthy trees per acre within three years of harvesting in order to maintain its 22 million acres of forestland. Oregon, the first state to pass reforestation legislation, requires “a minimum of 100 to 200 trees per acre” within two years of harvest, depending on a site’s productivity among the states 30 million acres of forests — almost half the state’s entire landmass.

As green and wooded as the Pacific Northwest is, their 50-some million acres of trees are but a fraction in comparison to the 300 million acres of deforested land globally since 1990. If the remaining forests still scrub and store 30% of the world’s annual carbon dioxide emissions, what would that number be if we could replant even half that deforested land? That’s what DroneSeed and others in the forestry business are so anxious to see. 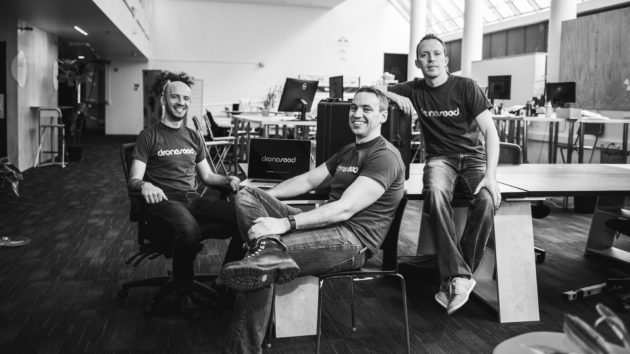 While DroneSeed’s swarm of technological forest fairies are still being tested, the drones are looking like an highly efficient alternative to human foresters. Where one worker can plant about 800 seeds in a day, DroneSeed ups the ante with a single drone predicted to plant 800 seeds per hour, rain or shine, up- and downhill. To put an average forester’s energy expenditure into perspective, the rule of thumb has been that one day’s work is equivalent to running two marathons in that same day.

There are still a few kinks to be worked out in the drone’s design. Right now, a DroneSeed drone has a flight time of about 30 minutes, though a full acre requires an hour and a half of flight time. Moreover, the team’s excitement to develop the technology has played into some of its bottlenecks: “iteration on our seed capsules and designing our drones to maximize speed, payload, and accuracy, all at once, has been a challenge.”

For now, Canary and the DroneSeed team are focused on precision herbicide spraying. Before the drones can take off and be used in real-world scenarios, the team must also navigate new civilian drone regulations and work through permits in order to use drones for herbicide-spraying purposes. Though the tests are being done up in the Pacific Northwest, they hope to apply the technology in areas like the Amazon too.

If DroneSeed succeeds and members of the $200 billion forestry industry start taking a liking to these machines, the sky’s the limit for how quickly this technology will grow — not to mention all those trees. But just like with the forests Canary wishes to rejuvenate, we’ll have to wait patiently to see what will happen next.