Air pressure: an invisible force that plays a subtle yet significant role in our everyday lives. Some easy examples are the pressure in your car’s tires or storm system ruining your weekend plans. Heck, our own bodies are balanced against the ambient air pressure so we don’t just explode or collapse in on ourselves. Just think of how spider crabs feel when they’re pulled out of the water. One application of pressure people don’t often think about, however, is its role in food packaging and production. But that’s bound to change in the coming years — or right now, if you keep reading.

While pasteurization is better known in the food world when it comes to increasing shelf-life (liquid foods and beverages are heated to a point that kills most food-based microbes), it’s high pressure processing that’s making headlines lately as an increasingly preferred method to process, sterilize, and package our foodstuffs. Otherwise known as pascalization (after 17th century French scientist Blaise Pascal who studied the effects of pressure on fluids), bridgmanization (after physicist Percy Williams Bridgman who also studied pressure later on in the early 20th century), or simply HPP, high pressure processing is a “cold press” technique that does just that: squeezes the living daylights out of juices, meats, milk, produce, and seafood to the point that it renders microbes inactive without the need for heat. But before we get into that, like all good stories, let’s start at the beginning.

Hite and Larson: Researchers Under Pressure

Despite the lack of public acclaim until recently, pascalization has been around since the late 1800s. While Pascal has long since expired, even back then, his work and ideas were revisited upon by B. H. Hite in the 1890s, with records of the first successful experiments dating back to 1897.

His research started as an exploration in food processing without the use of added antiseptics, preservatives, or other methods that often changed the taste and quality of the food being treated. Keeping foods lasting beyond their shelf-life was one thing. But if the freshness and taste isn’t there, it’s just… well… not the same.

Using Pascal’s work as inspiration, Hite carried on his legacy, testing how food and microorganisms were affected by pressure.

By 1899, Hite and his team became the first to demonstrate the theory that, indeed, microbes inactivate (whether by dying completely or rendering incapable of reproduction) when subjected to higher pressure conditions. These experiments were first tested on milk to keep it from spoiling; at first, they were able add an extra day or two, and then up to a week as pressure increased. Apparently having grown bored with dairy products, the team also experimented with pressure’s effects on infectious bacteria. Among them were strains of tuberculosis, typhoid fever, and anthrax.

Across all their trials, these experiments established a pattern between microbe growth and the pressurization of their environment. While high pressure processing proved viable, Hite’s techniques weren’t scalable. Without scalability (and some randomness, unable to guarantee sterilization every time), the technology wasn’t ready for widespread adoption.

Back Into the Breach

By 1914, Hite and his team published a newer, more thorough report including microbe counts across other foods in addition to milk, like fruits, vegetables, and juices. While pascalization proved beneficial to some foods, others didn’t react nearly as well, their microbe levels largely unchanged. Around this time, W. P. Larson (another researcher with his own team that studied the effects of pressure on microbes for the sake of developing better vaccines) had discovered that pascalization’s effectiveness wasn’t just how much pressure’s applied, but what gas was used to create that pressure. From carbon dioxide, hydrogen, and nitrogen, it was the first that was most effective.

Again, the two teams continued to prove their theories in their respective labs, but practicality remained elusive. Their inability to scale the process and lingering inconsistencies of effectiveness caused bottlenecks keeping high pressure processing a common practice. Throw in two World Wars for good measure and pascalization’s fate was all but sealed as tightly as one of its testing chambers. Well, at least for the time being.

From Footnote to Headline

Research picked up again in the 1970s as researchers began studying bacterial spores. Their goal: to find the right pressure to kill them off. Characterized by a thick protective shell, spores couldn’t be cracked just by turning up the pressure full blast.

By first processing harder-to-sterilize foods with moderate pressure, it causes the spores to germinate. In essence, this first catalyzes their reproduction. Then, with either heat, higher pressure, or ionizing radiation, the germinated spores are easily killed. But as always (and if you haven’t caught the theme yet), such a method in tandem has yet to be developed for widespread use.

So what the heck is high pressure processing good for?

Though not all foods respond well under pressure, foods like juices, fruits and vegetables (especially pastes and dips like guacamole or salsa), dairy products, and meats perform exceptionally. For these HPP-friendly groups, a boom in widespread commercial use in the 1990s prompted further innovation and exploration in pressure-based food processing and the benefits it provides over other methods.

High pressure processing extends shelf-life with negligible degradation of quality, taste, or nutritional properties. Moreover, the process itself is a sustainable and healthier alternative both for our environment and ourselves respectively. The entire cycle (which you can see below) only requires electricity and water that can be recycled; all this while reducing the need for preservatives and other chemicals used to keep food fresh. 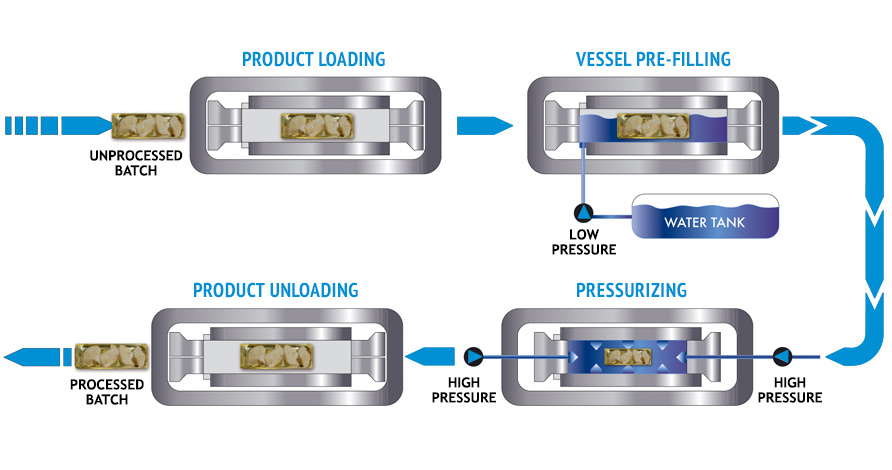 To a lesser extent, another benefit of this kind of processing is that compromised packages are easier to spot in batches. As foods within the packaging are compressed and sealed, any tears or holes in this packaging would leave it loose. This makes it easier for distributors (and you) to visually confirm packaging integrity.

In addition to the other HPP-friendly foods, seafood benefits from this process twice over. Not only does high pressure processing increase the dismal shelf-life of meats like lobster, oyster, shrimp, crabs, and other shellfish by squeezing pathogens to uselessness; it also effectively “shucks” the meat right from the shells, letting it slide right off.

With all its benefits, there are still some who are skeptical of the true effectiveness of high pressure processing. While some criticism remains on how to best go about advancing this technology for widespread use (namely being able to treat more food or combine other processes with HPP to achieve better results), some problems stem from the perception of this technology and the products that use it.

The Definition of Fresh

While high pressure processing does keep food fresh for a longer period of time, the use of the word “fresh” itself in food marketing has been deemed misleading. As the FDA defines it, “fresh” can only being referred to “food [that] is unprocessed… in its raw state, and has not been frozen or subjected to any form of thermal processing or any other form of preservation.”

Two years ago, a similar terminology case bubbled up around California-based Suja Life LLC. Their juice line came under fire for the use of the word “raw” in its labeling. The plaintiff cited the correlation to the raw food movement and its principles against “artificial extension on the lifespan of [food] products,” while also claiming that “a direct and unavoidable result of the use of HPP is the destruction of enzymes, nutrients, probiotics, and minerals…” otherwise found in food in its pre-processed state.

Proponents of the technology dismissed these claims. After all, the key nutrients and enzymes are left undamaged — a main reason why some manufacturers actually prefer HPP. They also believed that “raw” was used acceptably as the foods in question still remained uncooked; from what the case deduced, it’s reasonable to equate the word “uncooked” with “raw.”

Aside from disputes over labeling, the future for high pressure processing seems bright. Coupled with Dow Chemical’s new development of recyclable flex packaging, the sky’s the limit. While experts are still figuring out ways to innovate applications within and without the food industry, HPP is looking to be another effective, sustainable food logistics initiative. Who knows what the next century of pressure research will bring?