Sustainable Cooperation: How Caring For Our Planet Helps Us Care for Each Other

We live on a planet that supports over seven billion people. There are cities and settlements on every continent, in every climate, barring only the harshest, most inhospitable environments. Although we have so much space and have thrived thus far, we consume so much that the waste we create is threatening the well-being of our Earth. As just one human among many, doing something about this can seem daunting, even inconsequential.

Behaviors like household recycling and limiting personal waste are fairly commonplace these days. However, we can do much more to play a role in the stewardship of our collective home. Around the world, people are stepping up within their communities and working together to ensure a clean and healthy future for generations to come.

No matter how you decide to pitch in, putting forth a little extra effort and lending a helping hand can make a world of difference. Community-sponsored “buy local” initiatives help support small farms. Repurposing used items can create new, different products without the material ever having to go to a recycling plant (or worse, a landfill). As a general rule, all these things can be done as part of a group — and these organizations are becoming increasingly abundant.

A study on sustainable resource management was performed by Associate Professor Timothy Waring and other researchers at the University of Maine, and focused on sustainability issues within the state. After observing the local blueberry, lobster, and food processing industries, they found that cooperation made it far easier to solve major issues like pest outbreaks, as well as manage the resources they all share.

“Cooperation is easier in small groups, easier with familiar people, and with similar people. And, cooperation is more durable when it is supported by social and institutional factors as well.”

The theory is that furthering the well-being of the community as a whole is, at times, not what is best for the individual. Instead, is much easier for people to make sacrifices for one another when they are your friends, your family, your neighbor.

A strong example in the study was the city of Portland, Maine, where an organization called Portland Buy Local launched ten years ago with twenty local business owners and citizens. Since then, it has grown to over four hundred members. As stated on their website, Portland Buy Local’s goals are:

A 2016 survey conducted by the Institute for Local Self-Reliance found that independent businesses associated with Local First organizations saw on average, a 7.4 percent sales growth, as opposed to 4.2 percent elsewhere. These businesses also reported increased media coverage and a spike in return customers.

It’s being proven that initiatives like PBL provide significant, tangible benefits to small companies. This not only nurtures local economies, but fosters a sense of community as more and more people purchase goods from people they know. Everyone involved has a vested interest in the same community, and what’s good for one is good for the other.

PBL has achieved a remarkable level of success in their decade of operation, making great strides simply by promoting local businesses as opposed to larger national chains. As a result, they’ve been helping other communities form similar organizations, rallying behind the idea that if each town helps its citizens and neighbors, we can eventually help everyone.

While joining an organization like Portland Buy Local is an awesome way to network with those around you and coordinate to improve your local environment, one does not necessarily need to become a member of an official group to help out. Business and trade is only one small, albeit important, facet of the larger issue at hand. In Tennessee, crafty members of a knitting circle are taking used plastic bags and turning them into sleeping mats for the homeless. Before we go into the story of the Bag Ladies of Union City, we should talk about why what they’re doing has been going viral and inspiring others to follow suit. As you know by now through our other posts on why plastics waste is a huge problem, our out-of-control use of plastic bags is a big contributor. By out of control, I mean that approximately one trillion plastic bags are used worldwide every year, with more than two million bags being used every minute. Since their introduction in American supermarkets in the 1970s, the average American family takes home roughly 1,500 plastic shopping bags a year.

Of course, not everyone just throws away plastic bags after they get their groceries and other sundry items home. A lot of families reuse them to line smaller garbage cans throughout the house, as storage containers or makeshift barrier materials in case ziplock bags aren’t available, or to pick-up yard waste — including the disposal of “land mines” your dog might leave out back for you. The Bag Ladies, a knitting circle of women from Union City’s Second Baptist Church, are a little craftier than that, crocheting sleeping mats for the homeless out of donated plastic bags.

While we may live in a land of plenty, homelessness is still a very real issue in the United States. According to a recent estimate from 2014, little over half a million people in the United States are homeless, with roughly 45,000 of them classified as “unaccompanied children” (you can see the full breakdown below).

Though a sleeping mat might not qualify as a home, the 3-by-6 feet beds are better than sleeping on the cold, hard ground. Each mat takes more than 600 bags to make, with the Bag Ladies already crocheting up about 88 of them, some of them even going to flood victims in Louisiana. For the mathematically inclined, that’s roughly 52,800 bags used so far, and given the average 1,500 bags per family, each American household could contribute enough materials to make two and a half mats each year; if all 124 million families contributed, that’d be enough for just under 250 million mats!

Since the group started in January 2015, the Bag Ladies gather every Thursday morning to continue their good work. First, they cut the bags into strips and tie them together, creating what they like to call “plarn” (or “plastic yarn”). Once the plarn’s ready, they crochet the mats together just as one would with conventional yarn. “It’s addictive,” Janice Akin, one of the Bag Ladies, told WPSD 6 Local News. “It gets to the point that you do two or three and see [sic], ‘Hey, I’m actually making a difference in someone’s life,’ and you want to do more.” 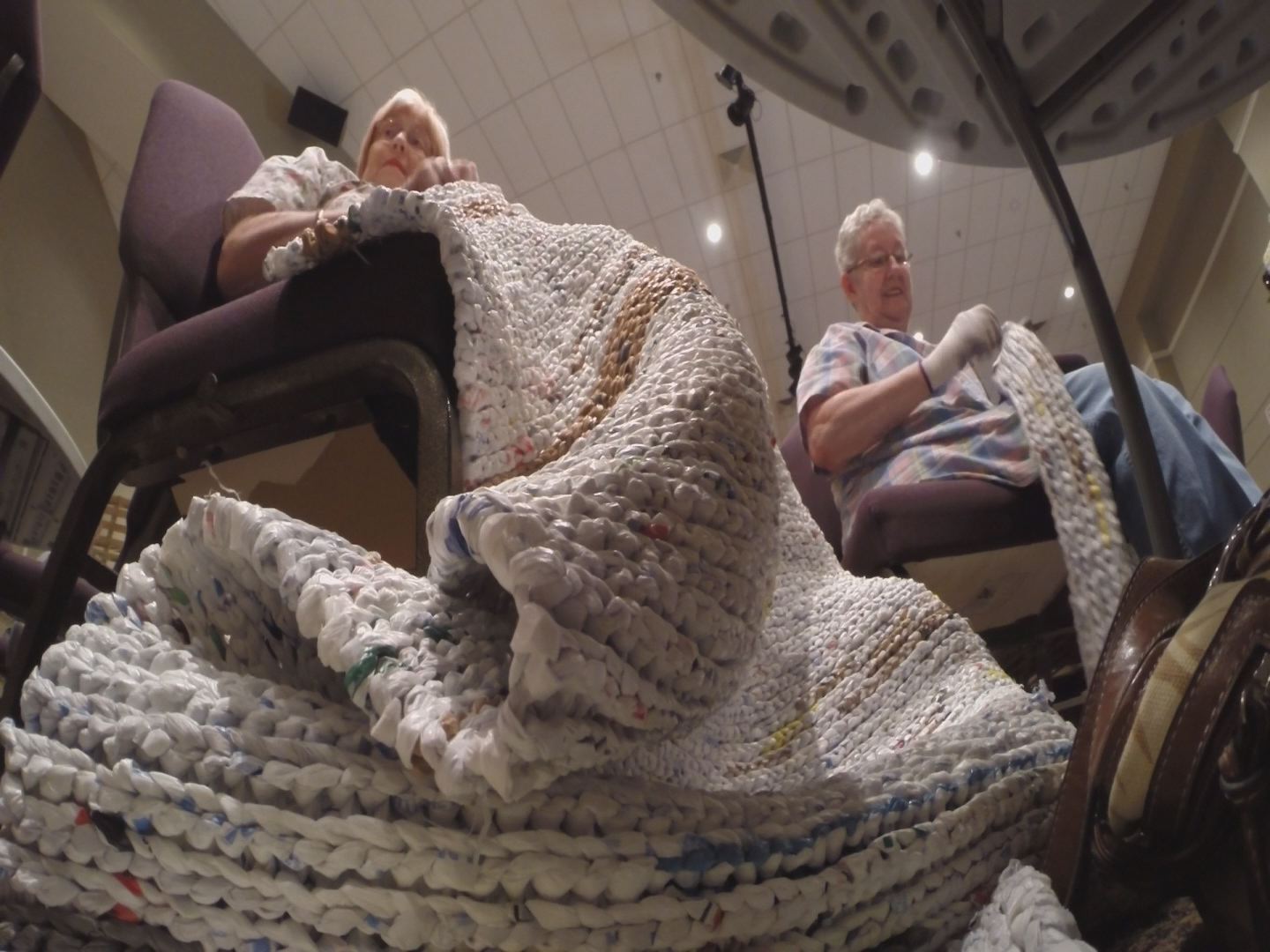 While the mats might not compare to a roof over one’s head, it sure is a start for some who have nothing to their name. Nevertheless, the women’s drive to serve their community and helping those in need is an inspirational story, tackling two issues at once: they keep their neighborhood clean giving plastic bags that’d otherwise end up littering the ground a second life and in that second life, these bags-turned-beds could add a little comfort to the lives of those who’re often ignored by the rest of society.

So far we’ve covered groups of people coming together in the name of a clean Earth – but what if you’re new in town, or live in a place where something like PBL doesn’t exist? If this is the case for you, there remains no shortage of ways to help your fellow human. Many companies are now embracing eco-friendly attitudes, offering reusable bags and containers as a one-time purchase that you can bring back each time you return. Simply choosing to shop at businesses that embrace these policies is a step in the right direction.

Cattle with a Conscience

In Lynden, a small town in Washington State, a local dairy farm is providing quality, organically produced milk to the Pacific Northwest, all while keeping a strong focus on sustainability. Larry Stap is the owner of Twinbrook Creamery, and he’s taking on a pricing system that overwhelmingly rewards volume over quality with his own brand of farming. A fifth-generation dairy farmer, Stap and his family are employing a philosophy that puts less emphasis on quantity and a little bit more on love.

In an interview with YouTube channel Farmresilience, the owner gives some insight into his methodology. First off, Twinbrook raises the Jersey breed of cattle rather than the more common Holstein. Holsteins have the highest rate of milk production of any modern breed, making them ideal for industrial farming. However, Jersey cows like Stap’s produce a milk that contains more “solids” like cream or butterfat. This gives Twinbrook’s milk a flavor that is noticeably richer and sweeter than its cheaper, more common counterparts.

They also process and bottle their own milk, selling directly to stores rather than using a middle man. Combined, these factors mean that Larry’s farm can produce a higher quality product and still manage to sell it at an affordable price.

So, they’ve got a pretty ingenious business plan, but what are they doing to ensure a greener future and foster community in their neighborhood? Well, for starters, Twinbrook employs a pretty nifty deposit system. All their milk is bottled in glass, and each purchase includes a $2.00 deposit which is refunded if you bring the bottle back. This not only encourages one-time container purchasing, but also eliminates their demand for the traditional petroleum-based plastic jug.

Also important is ensuring the longevity of the land they farm. In Larry’s own words, “Our philosophy is that we are stewards of the land and the animals…when I get done farming this ground, I would hope that it will be in a better soil condition than when I started for the next generation. The animals that I currently am raising will have superior genetics to live longer and produce more milk than when I started.” Since the next generation of the Stap family is poised to take over the farm after Larry, the land should be in good hands for years to come.

Twinbrook also hires local. By bottling their own milk and not moving to a larger plant elsewhere, Twinbrook is able to provide a large amount of jobs to families in Lynden and the surrounding towns. If you’re looking for an example of a company with the best interests of the earth and the people at heart, you don’t have to look much further than Twinbrook.

We stand at a pivotal junction in the history of our world, facing perhaps mankind’s greatest challenge to date. Each and every one of us must make the conscious decision to stand as one to stop the deterioration of our home. More people each day are recognizing the issue at hand and doing their part in their communities. Whether you’re acting as a business owner, a consumer, or simply living your daily life, taking an extra step to work with those around you is becoming more and more essential by the day. When we help our neighbors, we help the whole world.