With over 150 million tons of plastic waste floating out at sea and millions more stashed away in dumps on land, you don’t need us to tell you what the problem with that image is. In the World Economic Forum’s latest report on the future of plastics, if we don’t curb our use (and subsequent waste) of this fossil fuel-based material, there’ll be more plastic than fish by weight in the Earth’s oceans by 2050. 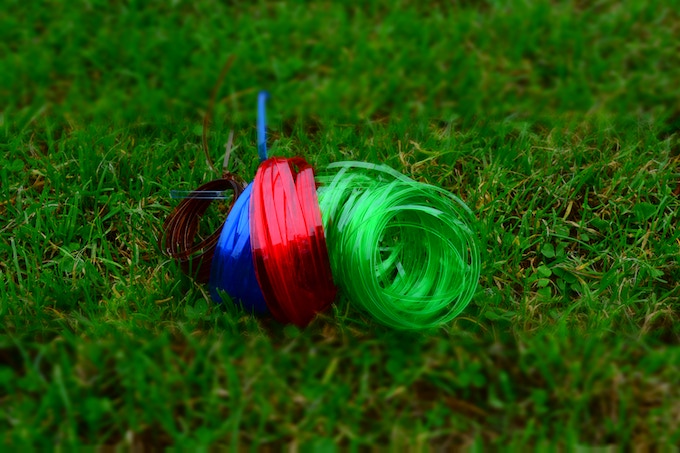 Though the reality of our situation might be scary, there are some that are taking advantage of it. Some are creating cinder blocks like adult-sized Legos; some are cutting plastic out of the equation entirely, replacing them with edible substitutes like “bioplastics” made from grains or seaweed; and some still are spinning old bottles into something short of gold much like an eco-friendly Rumplestiltskin.

And while it might be a bit of a stretch comparing plastic to rare metals, the Plastic Bottle Cutter might be the tool of choice for start-up entrepreneurs and Etsy artisans the world over, turning one of our biggest, ugliest problems and into one of our most-readily available resources.

That said, given the Plastic Bottle Cutter’s propensity to spawn other niche start-ups that start wearing away at plastic waste, you might be wondering: what exactly is this thing?

A New Spin on Upcycling

Now compared to other technologies, the Plastic Bottle Cutter itself might be a little underwhelming: retailing at $25, the device is little more than a razor blade housed with a cutting guide mounted onto a wooden handle. Launching their Kickstarter campaign this past February, the team set out to secure roughly $9,445 in funding for their project. Within little over a week, more than a thousand backers pledged their support; by the end of the campaign in April, the team raked in over $397,000 across 7,800 backers. That’s about 4,200 percent above and beyond the initial goal (which might also indicate the percentage of how excited people are to get their hands on this blade-on-a-stick).

But it’s not the Plastic Bottle Cutter itself that’s so awesome, so much as what it produces. After removing the bottom of the bottle and heating the plastic enough to soften it and smooth out any ridges, the user starts the cut by twisting an edge of the bottle in the housing. Then, by pulling on the cut portion, the bottle is then spun into a fine plastic rope, unraveling into a multi-purpose line whose uses are limited only by your imagination.

The variable colors (depending on the bottle used) and thickness (depending on where housing’s set on the stick) makes the device a natural arts and crafts tool. The plastic can be weaved and twisted into a variety of shapes and objects, from mats to lampshades, to bracelets and jewelry. That isn’t to say that the rope doesn’t have practical field applications as well.

Plastic, by nature, is surprisingly strong; though you can easily crumple as thinner plastic bottles and containers, tearing or breaking plastic is another story entirely. If you’ve tried getting into anything stamped into a hard plastic container with your bare hands, you know the struggle trying to wrench your way inside. That same tensile strength is found even when the plastic is cut into rope. In fact, you can even double up on the length a few times and this same rope can be used to tow cars and other vehicles, and even support the weight of multiple people standing on top of it.

Apply enough heat and the rope also can make a useful adhesive in a pinch. By wrapping the rope around wooden joints and blowing hot air directly onto it, the plastic will then shrink onto the surface in a tight vacuum seal. Certainly, those are only a few of the suggested ways you can use the Plastic Bottle Cutter (which you can learn more about in the video below), but again, this new tool is only limited by your creativity.

As the first commercial models were released at the beginning of this summer, it’ll be fun to see what new ideas branch from this savvy innovation. By turning old plastic bottles into colored rope that’s as versatile as it is (nearly) indestructible, the Plastic Bottle Cutter yet another way to pull apart our plastics problem. If you managed to get your hands on one, what would your solution be?