Can You Shoot Down Pesky Trespassing Drones?

Many find civil drone technology exciting and innovative, but there are plenty of people who are more annoyed than impressed. With nosy neighbors taking their camera-equipped drones out for a flight around the cul-de sac, some worry about the invasion of their privacy and personal space. Some people have even taken it upon themselves to shoot down trespassing drones like $1,500 clay pigeons. Before you dust off the ol’ shotgun, however, let’s talk about how to properly handle intrusive drones without the use of firearms.

Make no mistake: with the rapid rise of drones and their recent introduction into civil applications, we live in a time of science fiction come to life. From medical emergency and disaster response to surveying and scientific observation, from pizza and product delivery to streaming sporting events and parties from a bird’s eye view, there’s no shortage of tasks for these modern marvels. Of course, with everything that’s good, there’s a little bit of bad thrown in the mix. Aside from their roots as military equipment, drones have also been used for less savory activities such as drug trafficking and obstructing rescue workers, among other things. But even people who use recreational drones innocently–that is, without the intent to cause harm–they still have a habit of getting in the way.

These flying robots come with a slew of legal questions that need answers. With the FAA regulating drones alongside helicopters, planes, and other aircraft, where does their jurisdiction begin and end? Private property rights have always defined two dimensions, but what about the airspace above the lot line? What’s a reasonable response to a strange UAV hovering outside your window?

Plenty of drones are still used as weapons, after all, often with civilian casualties. To some, regardless of proper civilian use, this technology is merely a remote-controlled camera or weapon; it’s only a matter of time before worse things happen.

While we tend to believe that more good than bad will come from this new tech, legislation still hasn’t caught up to help prevent improper use. But what can be done about trespassing drones now?

As some citizens take matters into their own hands, the outcome in how courts handle these cases is a toss-up. In 2014, a New Jersey man shot down his neighbor’s drone with a shotgun as it hovered around his property. The neighbor claimed to be taking pictures of a friend’s house that was still under construction, only to have his drone peppered with shotgun pellets. The shooter was arrested and charged with possession of a weapon for an unlawful purpose and criminal mischief; the shotgun used in the act was seized by the local police and the shooter posted bail. While the case dealt mostly with the man firing off a shotgun in a populated area, whether or not the drone’s flyby was illegal was still left up in the air.

The following year, a Kentucky rancher tested out his own shotgun skills on a trespassing drone over his land. The man was arrested for first-degree endangerment and criminal mischief. Unlike the New Jersey man of yesteryear, however, the judge cleared the rancher of all charges, asserting he had a right to shoot the drone down: “I think it’s credible testimony that his drone was hovering from anywhere, for two or three times over these people’s property, that it was an invasion of their privacy and that they had the right to shoot this drone.”

As far as defending your home from robot invaders goes, a successful legal defense is grounded in reasonable response. Unfortunately, there’s no consistent definition for that just yet.

If property law wasn’t complicated enough, throwing the right to privacy and airspace sovereignty in the mix doesn’t make finding solutions any easier. As the FAA claims jurisdiction of all airspace above ground, regulating drones like other aircraft, it’s challenged the fundamental understanding of property rights:

“According to the Federal Aviation Administration, every inch above the tip of your grass blades is the government’s jurisdiction. ‘The FAA is responsible for the safety and management of U.S. airspace from the ground up,’ said an agency spokesman… But common law long held that landowners’ rights went ‘all the way to Heaven.’ And today, it’s clear that they have some rights.”

This common law is derived from 16th century England as cuius est solum, eius est usque ad coelum et ad inferos (whoever’s is the soil, it is theirs all the way to Heaven and all the way to hell). Otherwise known as the ad coelum doctrine, this principle protected mineral and oil rights found in the ground under private property. 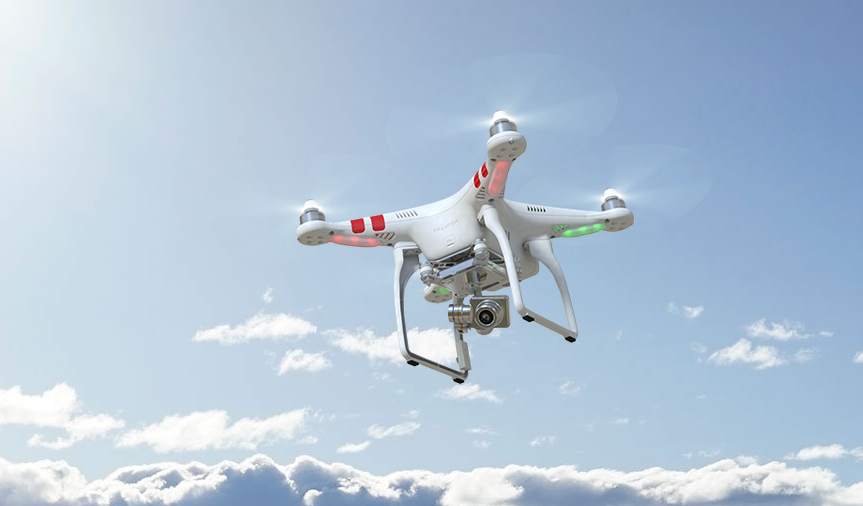 Other drone opponents use the Fourth Amendment, arguing that “excessive drone use to monitor regular civilians without ‘probable cause’ is a violation of freedoms and civil rights.” Others still call on the 1946 case of United States v. Causby which set the precedent for two major principles regarding airspace below the minimum safe altitude (or MSA) for aircraft to fly over buildings and people: property owners have “exclusive control of the immediate reaches of the enveloping atmosphere;” and they own as much of the air above their as they can “occupy or use in connection with the land.”

Despite these long-upheld cases, however, drone defenders argue that none of them really pertain to drones. Causby was specific to property damage associated with being so close to a military airfield whose planes flew a lot lower to the ground than modern aircraft; the use of the Fourth Amendment as a defense is weak at best as ‘probable cause’ usually only refers to law enforcement and warrants; and ye olde English judges of the 1500s had nary a clue what air traffic was, save unladen European swallows.

But what if you’re less annoyed and more threatened by a random UAV zipping around your house? If the preferred response is to let law enforcement handle trespassing drones, where does that leave the Castle doctrine? How long must a person wait to determine the threat is legitimate before they can take action to neutralize it?

Well… no one’s quite sure.

Flying into the Future

So if you’re still wondering if you can shoot down trespassing drones doing fly-bys over your land, your chances the court will side with your defense is as scattered as your birdshot of choice. But while you assert sovereignty of the air hanging within your lot line, where does leave the rest of the air traffic leaving vapor trails high above your house? According to the ad coelum doctrine, their flight paths are still between your land and the Heavens.

A lot of it boils down to a reasonable justification to discharge your weapon. With the FAA’s regulation, it’s easy to believe that drones “are already governed under the same laws that regulate aircraft like helicopters and airplanes. Those laws, unsurprisingly make it a crime to shoot down planes flying over your house.” If drones are covered by the same laws as planes within navigable airspace, then the legality of shooting wandering UAVs is pretty cut and dry. But then that becomes a question of what’s now considered navigable airspace.

Early last year, Senator Hannah-Beth Jackson (CA-D) penned a bill trying to define personal airspace 400 feet above the ground of one’s property. The FAA’s jurisdiction would then be any space above that line. While the bill passed the California House and Senate, it was vetoed this past April, again leaving airspace ownership left unclear.

At the Federal level, Congress is currently working on a bill to further regulate recreational drone use. Of course, how long that’ll take is anyone’s guess. While we’re waiting for the government to help create standards for civilian UAVs, the changes we need could come from simple changes in behavior. If you own a drone, don’t be obnoxious with it, bother others, or disturb their privacy. On the other hand, don’t be so quick to take pot shots at the neighbor kid’s latest Christmas present. As always, reason prevails. It’s just going to take some time to get everyone on the same page.