VolkerWessels Wants to Roll Out PlasticRoad

When it comes to construction, plastic doesn’t just have to come in Lego-shaped bricks to be a viable building material. Dutch construction company VolkerWessels is opening up about its PlasticRoad project which, as the name suggests, is looking for an alternative to conventional road-building by using recycled plastics instead.

Is asphalt truly so bad that we need to find alternatives for it in a hurry? No, I wouldn’t say that. I will say, however, that it doesn’t hurt finding more efficient methods and materials to implement in business and industry, especially if it comes to lowering our reliance on fossil fuels as well as shrinking our carbon footprint. Asphalt’s key component (bitumen) is still derived from oil, but that only amounts to roughly 5 percent of asphalt pavement’s composition (the rest being an aggregate of stone, sand, and gravel). According to the Asphalt Pavement Alliance’s Carbon Footprint study, road construction companies are already making green impacts with asphalt by recycling the material:

“Currently in North America, at least 95 percent of the asphalt pavement removed from the road is either reused in new asphalt repavements or recycled as base or shoulder material. The material not reused or recycled is still not burned and thus the embodied carbon is never released into the atmosphere. In essence, when we pave with asphalt, we put the aggregate and asphalt cement [bitumen] in the bank for future generations.”

And even when excess carbon is released, the study goes on to detail that Australia’s state road authority VicRoads has been playing with other carbon-neutral projects, planting some 7,400 trees along new roads to cancel out any carbon generated by their construction and use. When it comes to carbon emissions, however, VolkerWessels wants to do more than break even. That’s where PlasticRoad comes into play.

Putting the “Fab” in “Prefabricated” 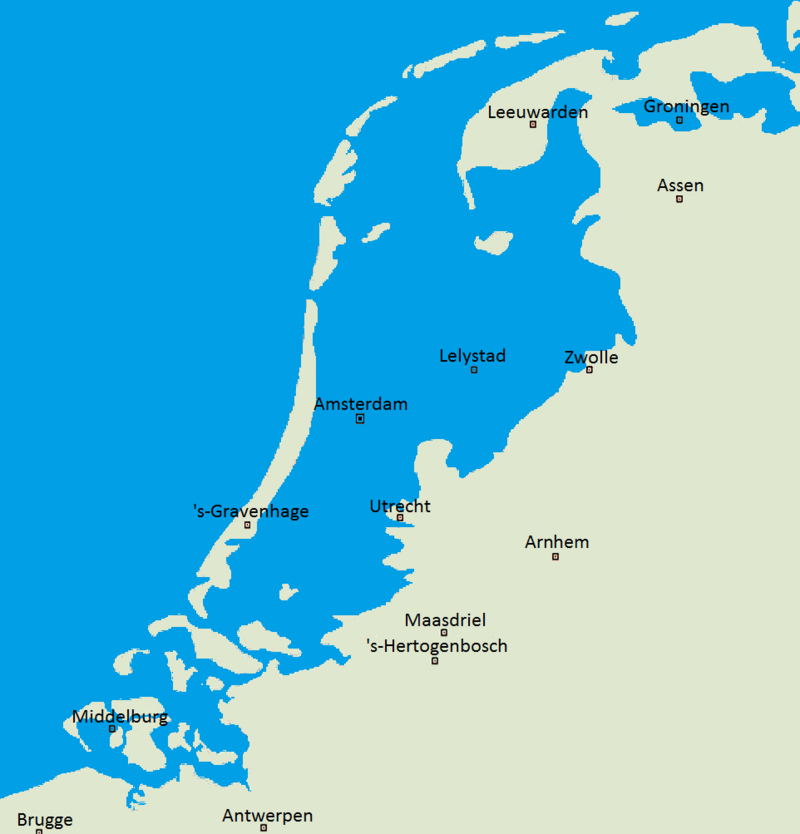 Areas in the Netherlands below sea level | Image source: Wikimedia

The Netherlands has been getting a lot of attention lately with its green technology initiatives. From its burgeoning design students to established firms, there’s a major interest in fighting back climate change. As sea levels rise, the coastal country has a lot on the line, especially since just over a quarter (26 percent) of its land lays below sea level, and about half exceeding one meter above sea level. If not for the system of dikes and levees holding the ocean back, places like Amsterdam would be flooded with seawater as illustrated by the map at right. Suffice it to say, the Dutch have a vested interest in curbing the rise of global temperatures, lest the sea reclaim the land area where about a fifth of their population resides.

With that in mind, it makes sense that the Netherlands has been a haven of sustainable innovation, especially in Rotterdam, home to the world’s most technologically advanced port. While the Port Authority of Rotterdam has been testing aquatic drones such as the Waste Shark that “eat” trash floating on the surface before it can be swept out to open waters, it’s thinking about about giving PlasticRoad a trial run, beefing up its green tech on land. Jaap Peters, a member of the Rotterdam City Council Engineering Bureau, can’t wait: “We’re very positive towards the developments around PlasticRoad. Rotterdam is a city that is open to experiments and innovative adaptations in practice. We have a ‘street lab’ available where innovations like this can be tested.”

But what the heck is this PlasticRoad? How is road building going to stem the literal tide that threatens to swallow a good chunk of the Netherlands whole? VolkerWessels is looking to attack the problem in two ways: by minimizing carbon emissions associated with the construction, installation, and maintenance of roads and by using plastics waste (mainly from the oceans), which, in turn, lowers carbon emissions further from their breakdown at sea or in landfills.

Though PlasticRoad segments have yet to be used en masse across cities, they already look like a promising substitute to conventional asphalt pavement. From Labroots’ exploratory article on the project: “The roads would require less maintenance than asphalt and would be able to withstand greater extremes of temperature — between -40º C and 80ºC [-40º F to 176º F]. Roads could be laid in a matter of weeks rather than months and last about three times as long. Additionally, the plastic roads would be lighter, reducing the load on the ground, and hollow, making it easier to install cabales and utility pipelines below the surface.” The hollow construction also allows for superior drainage, making PlasticRoad segments virtually flood-proof. Moreover, the plastic construction also makes these roads more resilient to chemical corrosion compared to asphalt, meaning less maintenance and repairs over the course of a road segment’s life.

It’s important to note that most of the emphasis on the road’s “greenness” comes from the low energy costs associated with its construction and installation. As PlasticRoad segments are prefabricated off-site, the only equipment needed is to transport them to the construction zone, digging a trough wide enough to slot the sections, and then fitting them in, piece by piece. If a segment becomes damaged, they can be swapped out for a new one, snapping in and out similar to Legos. Moreover, if the technology enters practical use, the prefabricated sections can be edited for further innovations, integrating other elements such as “traffic loop sensors, measuring equipment, and connections for light posts.”

Rolf Mars, the Director of KWS Infra (the VolkerWessels subsidiary tasked with the project), and his team are also interested in using PlasticRoad as an example of modern prefabrication; as the project’s official website mentions, the technology could open doors to “power generation, quiet road surfaces, heated roads, and modular construction.” When it comes to making hollow, modular plastic roads like this, as far as Mars knows, they’re “the first in the world” to take on such a project. With its two-pronged assault on carbon emissions, it’s hard not to be excited at the possibilities for such a technology.

Before you get too excited, PlasticRoad is still “an idea on paper” since Mars told The Guardian last year when the project was first unveiled: “The next stage is to build it and test it in a laboratory to make sure it’s safe in wet and slippery conditions and so on. We’re looking for partners who want to collaborate on a pilot, as well as manufacturers in the plastics industry — we’re thinking of the recycling sector — and other knowledge institutions.” Provided the road passes these driven tests, it seems like a very viable, scalable solution. After finding industrial and conceptual backers (which hopefully its testing in Rotterdam will help with), it doesn’t look like PlasticRoad will have too many obstacles to overcome. The soonest these roads can start being installed at the moment is slated for the end of the decade, give or take around 2019.

Either way, what’s most important is VolkerWessels (and, by extension, the culture surrounding Dutch sustainability) is solving two problems at once: making one practice (such as road construction) greener while encouraging the growth of a reclaimed plastics industry, making waste plastic a more valuable commodity. If their intent is to go after the millions of tons of plastic floating in the ocean, entire firms could be dedicated to the “mining” of these massive garbage islands, cleaning up the oceans while mitigating carbon emissions from these toxic heaps of trash. By recycling the plastic into sturdy, hollow road segments, not only are we putting an invaluable and hardy material to good use, but being more environmentally (and economically) responsible by giving plastic a second life.

In other words, it’s projects like PlasticRoad that exemplify what green innovation is all about.