The Benefits of Dimensional Weight Over Physical Weight Pricing

As more and more shipping companies are switching over to dimensional weight pricing, a lot of people are wondering what the deal is. Why not stick with the traditional physical weight pricing model — after all, the heavier the package, the more it should cost, right? It turns out physical weight might not actually be the best way for shipping companies to manage their cargo. Not to mention the complications it causes for both them and the businesses that rely on them to transport their goods.

Before getting into the benefits of dimensional weight over the tried-and-true physical weight model, let’s first define some terms. Physical weight, as you can imagine, is simply that: the total weight of a package, regardless of size, shape, or density. This is usually the combined weight of the packaging materials (both inside and out) as well as the contents kept within. 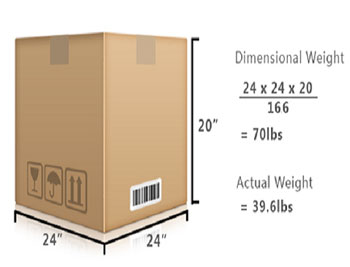 Dimensional weight (or DIM for short), by contrast, is a little bit trickier. While we have already gone in depth as to what that all means, the quick explanation is that DIM is a measurement of volume divided by a certain factor (a DIM divisor) that varies from carrier to carrier.

That said, a good rule of thumb is to find providers with high DIM divisors; the higher the divisor, the lower the DIM weight (and the less you’ll end up paying).

The full formula for DIM is as follows:

If you need a visual aid, an example of package and its comparison between DIM and physical weights can be found above.

“Now wait just a darn second,” you might be thinking. “The DIM weight of that package is almost twice as high as its physical weight. If carriers charge per pound, aren’t they blatantly just trying to rip us off by artificially inflating package weight?” While DIM might usually be higher than physical weight (though there isn’t an exact correlation between the two measurements), the industry shift to DIM weight pricing is actually more of a correction of a faulty system most of us have been taking advantage of.

After all, if carriers have to determine how much they can carry in their trucks and planes by volume, doesn’t it then follow that they should be charging their customers for the volume of their packages? A five-pound bowling ball and five pounds of feathers don’t take up the same amount of space, but with the old model, they would be charged the same. If anything, the carriers are correcting an error to keep themselves from being ripped off — though they wouldn’t be so quick to denounce those who need their services of that.

Though it might be more expensive for now, this new model is more realistic and actually accounts for the volumetric capacity of logistics vehicles unlike the old physical weight system. In turn, it forces sellers to be more effective with how they package their own goods, making sure they take up as little space as possible.

Don’t you worry. The benefits of dimensional weight pricing aren’t just to be had by the carriers themselves. There’s plenty of good things for business owners like yourself and other retailers who can look forward to this new system, some more immediately realized than others.

What Dimensional Weight Can Do For You

Despite the formula above, using dimensional weight is an overall more simple approach to calculating the cost of your packages with your carrier of choice. Freight Snap does a good job explaining why that’s the case:

“The current class-based system factors in variables like stowability, handling, and liability, in addition to density, making it difficult for shippers and carriers alike to properly classify freight. The density-only approach, however, will eliminate these additional variables and disputes over commodity class along with them. When you remove the guesswork, you also reduce the possibilities of undercharging or overcharging customers, which creates more balance and transparency between carriers and shippers.”

Some critics of DIM worry that these later freight classification corrections will come back and bite them in the budget — and they’re right to worry. Because of all the guesswork with the old class-based system derived from weight, these re-classifications and the subsequent bills have been a pain, especially as carriers seek to collect corrected balances after the recent DIM changeover.

That isn’t to say that this will remain the reality forever; in fact, it’d be more accurate to say that as you and your business gets better at keeping your packages’ DIM weight down and follow the new system, the less likely you’ll need to be re-billed since… well… you’re already on top of all that.

With a simplification of shipping costs comes a simplified budget too. Without needing to make almost-blind estimates trying to account for possible re-classification, you’ll be able to make more accurate forecasts on your shipping budget based on DIM of your packages, especially if a lot of the products you ship fit in the same sized containers.

Keeping that in mind, DIM favors efficient packaging habits; regardless of how much the package weighs, it’s the overall volume that matters most. By ensuring your packages are as small as possible, you’ll end up shrinking both your shipping and packaging materials costs. By reducing excess materials, you’ll have less waste to worry about which is as good for the environment as it is your pocketbook. Not to mention your image of corporate social responsibility to a sustainable future as well, which today’s consumers are valuing at record highs.

Some of these smart packaging practices require a bit of creativity and imagination.

As more companies pay attention and fall in line with the DIM weight pricing model, the easier the job will become for carriers who can the ship more efficient loads of goods. Of course, it then follows that the sooner you implement these practices in your own packaging schema, the sooner you can enjoy cost-efficiency and ingrain better shipping habits throughout your company.

This all translates to savings on the carrier end which eventually they’ll pass along to you and their other customers in the form of cheaper shipping. With this new model, it’s safe to say everyone stands to benefit: you (by saving money), your distributor (by saving space), the environment (by saving resources), and your customers (by saving face as an efficient 21st century company).

After all, you are an efficient 21st century company, right?