Is Cultured Meat the Future of Agriculture?

As we try to provide food for an increasing world population, the question of how to feed more people with less space and resources is still a massive hurdle to overcome. Now, scientists and food companies are nearing the development of affordable meats created via stem cells. While the price remains relatively high, we could see synthetic meat on grocery store shelves as soon as 2021.

In a field in middle America, a herd of cattle mills about, restless and unknowing. Their mournful lowing carries across the plains, thick with fear at the sad fate that must eventually befall all beef cattle. In their little minds, they hope that one day they will live not to be slaughtered, but to roam free, die with dignity, and ascend to the halls of their forefathers as did the bovine of ancient times.

Little do they know, the very creatures that eat them — the humans — are on the verge of a breakthrough that may release them from their grisly purpose. Deep underground, there is a lab where they grow the slabs. Great, glistening hunks of meat floating in chemical fluid, growing and expanding. Bubbles float up and roll over fleshy surfaces, as billions of cells knit together into muscle fibers. It’s a Frankenstein scenario, but this is one genetic creation that is entirely benevolent.

Men of science are nearing economically viable production of “cultured meat.” By taking cells from farm animals and multiplying them in vitro, they’re able to create a synthetic meat product that is, ideally, very close to the real thing.

A Monster Mash You Can Eat!

Farming, in its many forms, is integral to the identity of humankind. It’s what has allowed us to feed ourselves and multiply to a population of over 7 billion. It’s what happened when ancient man stood up and said, “I will not hunt! I will not gather! I will grow crops in an orderly manner!” I simplify, of course, but the fact remains that farming is hugely responsible for who we are today. In the thousands of years that we’ve been sowing the seeds of our own nutrition, we’ve become amazingly efficient at it. Farms give us everything from produce, to milk, to meat, and countless other goods.

Despite the overwhelming good it does us, there are downsides. Most of us are aware that global temperatures are on the rise, and that is due in large part to our farming practices. According to the USDA, 6 percent of greenhouse gases produced in the United States came from agriculture. Worldwide, the figure jumps to 30 percent. Now, this factors in things like growing crops to feed animals, and deforestation to build and expand farmland, so the percentage is very high because it’s including as many repercussions of agriculture as possible. 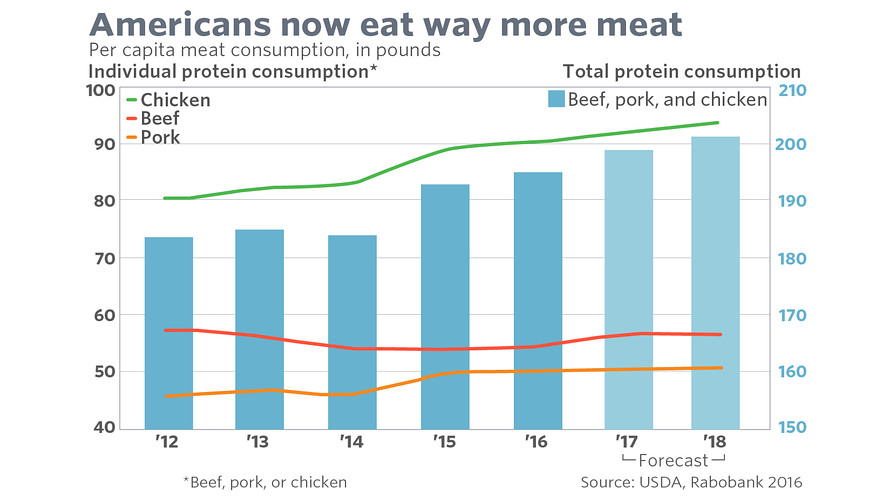 However, as Time states, there is much room for improvement, especially with regard to our meat production. With our population ever-expanding, researchers are emphasizing the need for increased efficiency in things like feed for livestock, and which kind of animals we raise and consume. For example, according to the same article, pigs and poultry are much more climate-friendly than are cattle.

Of course, the most impactful way to reduce emissions from livestock is to remove the need for livestock in the first place. This is where lab-grown meat comes in. If made cost-effective enough to become widely adopted, it reduces the need for large-scale factory farms, grazing land, and crops used to feed said livestock. All this can be replaced with produce that directly feeds people. The cost is dropping, the process more attainable, and already companies are experimenting with different types of meat to try and find products that can stack up against the real thing in both texture and taste.

Creating meat from cell culture opens up many possibilities aside from simply feeding people in a way that’s friendly to the Earth. By engineering the genes directly, it may be possible to create meat that doesn’t trigger allergies in people who would traditionally experience a reaction. Testing for health risks also becomes easier.

Producers can make meat without saturated fats, and because it’s made in a sterile environment, it’ll be free of bacteria that resides in traditional meat products. It also avoids the risk of diseases contracted by animals that can impact quality and safety, and doesn’t require the administration antibiotics and other drugs.

A Pretty Penny for a Petri Patty

The first taste-test of a lab-grown burger in 2013 found the meat to be “dry and lacking in flavor”. This was to be expected, as the burger contained no fat — something that the Dutch researchers behind the project have said can be fairly simply added to future production. Costing a total of $325,000, this was one expensive patty; a price that they’ve made great strides in curtailing.

In a more recent interview, the same researcher behind that original burger now says they’ve brought the cost down to around $11 per patty. It’s still expensive compared to the standard beef you’d find in the grocery store, but it’s not outside the realm of possibility anymore.

California’s Memphis Meats has been experimenting not only with hamburger products including meatballs, but also with chicken and duck. According to them, taste tests have been exceedingly successful and they hope to have products on the market by 2021. Cost is still an issue, however, as the cultured chicken weighs in at around $9,000 per pound. No matter how eco-friendly it is, nobody’s going to pay that premium.

Still, despite the significant cost drawback and taste differences, the early trials and tests are simply made to show us that this can be done, and that we’re on track to one day be able to grow something akin to the real thing in a lab using only a few cells, rather than feeding and raising a whole animal.

In The Public Eye

So, we’ve come a long way from cultured, clean meat being just a twinkle in a scientist’s eye. But as with hamburger that’s been left in the fridge just a bit too long, there’s always a gray area. This one happens to be legal. Since cultured meat doesn’t come from an animal, it’s somewhat unclear how it will be regulated and who the regulator will be.

Traditional USDA regulations pertain specifically to meat that comes from the slaughter of a real animal, so they don’t fit quite right. Because it comes from cell cultures, it could also fall under the jurisdiction of the FDA. Regardless of the answer, there’s surely a long and rocky legal road to figure out who will write the guidelines for this new frontier in food manufacturing.

The question also remains, how will the public respond to this? In an America that consumes around 25 billion pounds of beef per year (not to mention all the other kinds of meats), it’ll be a hard sell getting us to give up our delicious burgers and steaks. Not to mention the still-growing natural foods movement, which stands in stark contrast to everything about meat that starts in a petri dish.

The availability of plant-based meat substitutes which are already fairly popular has called into question the necessity of cultured meat. While reaching the point of growing indistinguishable meat in a lab would be a massive step in reducing our need for livestock, skeptics say it’s a waste of time if viable alternatives already exist.

Wanting pure, clean food and a desire to help the planet generally go hand in hand. Researching eco-friendly solutions to problems caused by our growing population is important, and cultured meat is exactly that. While the technology and affordability are still a few years off, as responsible human beings it’s important to remain open-minded to systemic changes like this that can impact us for the better overall. Is authentic, comparable synthetic meat an achievable reality? That remains to be seen. Who knows? Maybe one day we will all dine — on Frankenstein.