Ashes to Ashes: On Eco-Friendly Bullets and Bio Urns

Since the time of ancient man, forests have held a central place in our lives, mythologies, and religions. From ancient paganism to The Lion King, the “Tree of Life” has been the symbolic center from which all things originate. While, for the most part, we’re not making blood sacrifice in sacred groves anymore, our reverence for trees and soil still manifests itself in the way we think about our environment, and in the technology we create. Indeed, as green innovation is often painted as one that preserves life on Earth, naturally it also encompasses the business of death.

“In ancient lays, their only type of historical tradition, they celebrate Tuisto, a god brought forth from the earth. They attribute to him a son, Mannus, the source and founder of their people, and to Mannus three sons…”

In the Annals, a first-century history of the Roman Empire written by the famed senator and historian Tacitus, he describes the culture and customs of the Germanic pagans that occupied large parts of Europe at that time.

One of their ancient tales, passed down through generations in the form of songs, is an origin story. It tells the story of the god Tuisto, the divine ancestor of the German peoples. As the legend goes, Tuisto (known by the Germans as Tiwaz or the Norse as Týr) was born of the earth, made of soil and clay. From himself, he then created the first human, Mannus, whose name is thought to be the distant root of our modern word “man.”

Mannus had three children, and from each of these came one of three major Germanic tribes. This belief that humans originated from the earth created a culture of Earth-worship, and the pagans paid homage to their many gods in groves of trees, rather than temples. This belief also lent to Judeo-Christian doctrine of how God shaped Adam from clay. Incidentally, the name Adam comes from Hebrew adamah meaning — you guessed it — earth or soil.

Tacitus’ records tell of human sacrifice and strange rituals conducted within these holy groves. While these fearsome practices aren’t exactly common in our world today, the themes of recycling the body and humans coming from the Earth are very much alive.

Jumping ahead many hundreds of years to the modern day, our personal role in recycling has taken on even more of a physical imperative as our numbers grow and we try to find a way to preserve the Earth for centuries to come. Many new green technologies now embody this idea of life coming from death, and people returning to the forest when they die. These are just a few of the interesting — albeit morbid — technologies to stem from these ancient naturalist beliefs.

Legends or not, most people are aware of how essential the soil is to our survival. Not only is it directly necessary for all our agriculture, but it’s responsible for biodiversity, the characteristics of entire landscapes are largely determined by the soil in the ground. Massive conservation efforts are underway, both public and private, to ensure that our soil remains healthy.

Farmers, perhaps, know this best of all — the science of maintaining nutrient-rich and fresh soil is directly related to their success. Declining soil quality means decreased profit and productivity. In fact, in the U.S. right now, the USDA estimates that agricultural erosion costs us around $44 billion per year.

Even if primitive man didn’t physically spring forth from beneath the mud or shaped in the hands of an immortal being, if it weren’t for the simple loam beneath our feet, we wouldn’t exist. In this way, these old legends have much of their basis in fact.

Germanic paganism isn’t the only faith or culture to carry a theme of man being shaped from the earth. From Christianity’s man, made from “the dust of the Earth” to Islam’s man from “wet earth,” and countless other religions with similar writings, it seems to be a common, universal sentiment that we came from common, universal sediment.

Most of these same faiths have funeral traditions that involve burial. Modern technology is allowing us to be buried in ways that’s not only easy on the environment, but even brings forth new life from our bodies. 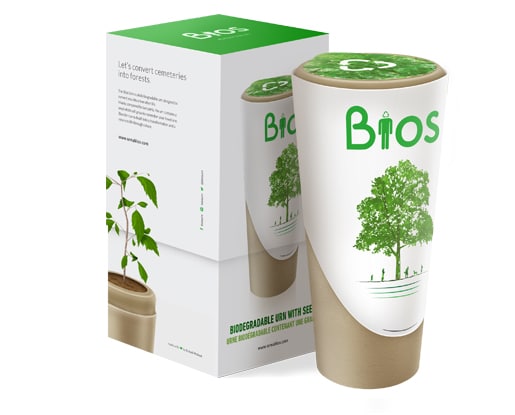 The Bios Urn is a specialized, biodegradable urn that contains a seed. When you purchase one, you get to choose from six different types of trees that can be grown from it. They also offer an “Incube,” an automated container that waters your tree according to data collected — not to mention it allows you to begin growing the tree inside your home, rather than in the elements.

One of the biggest draws to this burial option is family. It’s a way for a loved one to remain close to the people they cared about in life. Instead of family having to visit a graveyard or keeping Grandpa in a jar above the fireplace, it allows them to be laid to rest close to home, in a way that seems less final than a slab of stone and an inscription.

It’s an interesting concept for people that desire an environmentally conscious, natural burial and want to leave a living symbol behind after they’re gone, rather than a cold tombstone. As more people search for small ways they can leave less of a footprint during their life, the Bios Urn allows them to do it in death, sent back to, according to the ancient lore, from whence they came and prompting new life in the process.

“Ashes to ashes, dust to dust.” The famous quote, paraphrased from the Bible, refers again to the idea that we come from the dust, the soil, and return to it again in the end. The U.S. Army is on the hunt for a technology holds both life and death within a shell casing. They’re seeking a solution for significant pollutants around their training areas caused by bullets and spent casings left lying in and on the ground. It’s solicitation for a company that can manufacture not only biodegradable, plastic ammunition, but ammunition that contains tree seeds to reverse damage already done.

According to CNN, military facilities account for around 70 percent of the most polluted sites in America. After years and years of training exercises, the lead bullets and other byproducts build up, and it’s feared that they could begin to degrade and release pollutants into the soil and water if they haven’t already. It’s also possible that farmers and construction workers could dig up some of these residuals, and if any live ammunition is accidentally lying there, it can present a big problem.

Right now there’s no reasonable or easy method for cleaning this up, so a solution is necessary if we don’t want the land around these facilities to become stark, barren wastelands, devoid of all life save the occasional mutant. Bio-bullets, should an enterprising company take it upon themselves to build them, could be the solution. In true pagan style, they’ll bring life from the Earth via a device that was previously the very symbol of death.

The German word for tribe is Stamm, which literally means “stem” or “branch.” The very etymology of the word shows a traditional connection between family of humankind and Earth we inhabit. Since we all originate from the same place — that is, Earth — it’s imperative that we care for it, for the sake of our families and future generations.

We’ve been talking about how we’re planting trees via drone and cleaning our air with railroads. Now, by using eco-urns and bio-bullets, we can also save the environment with bodies and projectiles.