The Dirt on Conventional vs. Organic Farming

Americans continue to embrace and encourage organic farming. It’s important to understand exactly what organic farming means, what the benefits are, and if there are reasonable counterpoints from supporters of conventional techniques.

According to the Organic Trade Association’s 2017 Organic Industry Survey, popularity of organic food is continuing its upward trend. In the United States, total sales hit $47 billion in 2016, representing a $3.3 billion increase equaling 8% growth from the previous year. These figures far outpace the food industry’s overall growth rate, which currently sits at a paltry 0.6%. Per the USDA, in 2016 there were 24,650 organic farms and businesses in the U.S. That is a 13% increase in the number of farms from 2015. Growth percentage of organic farms has maintained double-digit increases for years.

These numbers indicate a paradigm shift that’s occurring throughout our country. Demand for organics continues to skyrocket. You need only stop at your local grocery store to see that organic marketing is everywhere. People want to localize their food and have begun to actively avoid purchasing food from factory farms, prompting restaurants to add farm-to-table promotions and items to their menus. Buying local ensures that you know where your food is coming from, and gives you the opportunity to support members of your community.

Underneath all the marketing there is quite a bit of misinformation and uncertainty. There is significant debate regarding whether organic food is healthier to eat, and whether organic farming is cost-efficient enough to become the primary source of food for hundreds of millions of people. In reality, organic farming is not inherently good nor is conventional farming inherently bad. How do we — the hungry consumers — make sense of this?

Organic farming fits within the larger umbrella of the sustainability movement. One of its primary goals is to approach agriculture in a way that preserves the environment in the long term. For example, organic farming strongly encourages crop rotation. That is, the growth of crops with different strengths and weaknesses throughout the year. Crop rotation increases resistance against threats like pests and weeds, helps to maintain healthy soil, and minimize erosion. This means that farms employing the technique don’t need to use artificial fertilizers or pesticides with potential to harm soil and reduce biodiversity.

Organic agriculture is also vehemently opposed to the use of Genetically Modified Organisms (GMOs). GMO has become a highly politicized term over the past decade, inspiring heated debate between farms and the federal government. Proponents of the organic movement often cite a lack of testing for adverse health effects and an increased tolerance to potentially harmful herbicides in their arguments against the use of GMOs.

Indeed, much of the draw to organic farming is the discontinuation chemical use. Numerous studies have shown that industrial pesticides cause adverse, unintended effects to the health of people and the environment. The most commonly used type of pesticide worldwide, neonicotinoids, have been linked to rapidly declining bee populations — something with extremely far-reaching implications for agriculture.

A Stanford University study confirmed 38% of conventional produce tested were positive for pesticide residue, compared with only 7% of organic food. Although it is hard to quantify the full effect of these chemicals, studies have shown that they spread beyond their intended target and can even enter our water supply.

By using only natural pesticides and fertilizers, as well as rotating crops, organic farmers attempt to increase the biodiversity of farmland. In theory, the more beneficial animals, bacteria, and insects that are introduced to farmland, the more fertile it becomes, improving potential productivity for future generations.

Per the Food and Agriculture Organization of the United Nations (FAO):

“Organic farmers are both custodians and users of biodiversity at all levels. At the gene level, traditional and adapted seeds and breeds are preferred for their greater resistance to diseases and their resilience to climatic stress. At the species level, diverse combinations of plants and animals optimize nutrient and energy cycling for agricultural production. At the ecosystem level, the maintenance of natural areas within and around organic fields and absence of chemical inputs create suitable habitats for wildlife. The frequent use of underutilized species (often as rotation crops to build soil fertility) reduces erosion of agrobiodiversity, creating a healthier gene pool – the basis for future adaptation.”

So, organic farming is a more diverse, less chemically contaminated, natural way of growing food. On the surface, it seems like a complete no-brainer. However, traditional farming also offers valid arguments in favor of its methods.

One of the most prevalent and compelling arguments for conventional farming is the production of higher crop yields. A 2014 Forbes comparison of data from the USDA and numerous organic growers found that in 84% of the studied instances, yields from organic farms were lower. Much of this can be attributed to conventional farms’ use of more effective herbicides and higher-yield, genetically modified crop variants.

Higher yield production means conventional farms can grow more food in a smaller area. The comparison estimated that we would need 109 million more acres of farmland to produce the same amount of food if all our food were grown on organic farms. For reference, that’s 5 million acres larger than the state of California. This presents a massive hurdle for organic farming, as full implementation would require an extensive reworking of our modern agricultural layout. 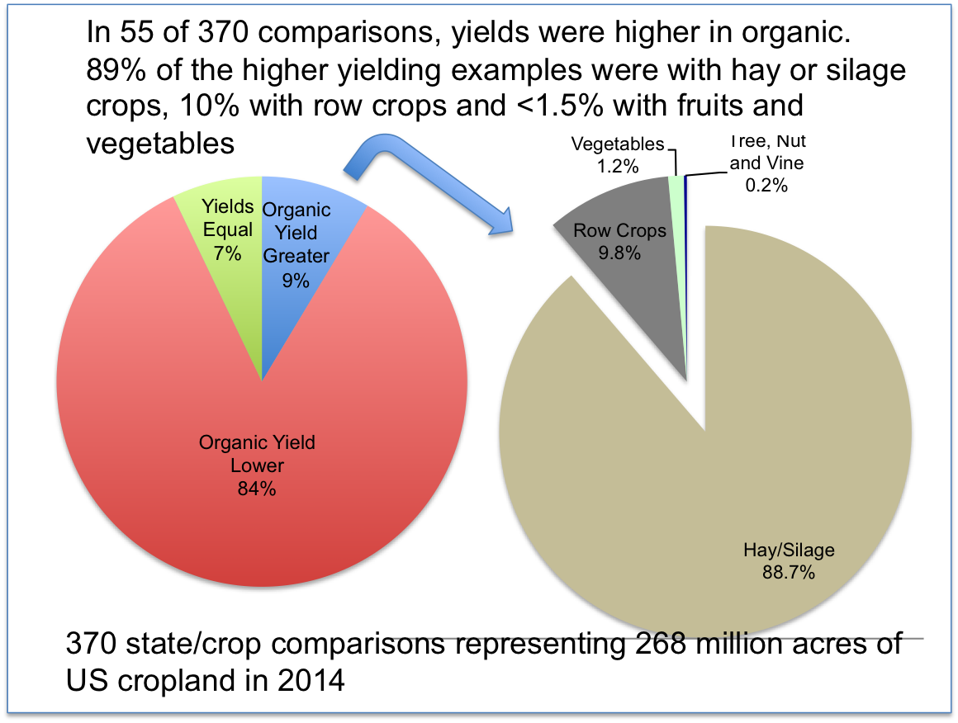 Another boon for conventional farming is the low cost of food production. Conventional farming methods have been refined over centuries to produce maximum output with minimum economic input, and to feed as many people as possible at the lowest cost. It is no secret that organic produce is more expensive; smaller operations and more labor-intensive techniques naturally facilitate higher prices.

GMOs have a hand in all this. They create hardier, higher-yield crops, facilitating a low-cost, high-production agricultural environment. Despite the negative publicity surrounding them, many studies show that GMOs aren’t measurably detrimental to the health of consumers. In 2012, Stanford University released a study that found avoiding GMOs resulted in no significant health benefits. They did find that conventional produce contained higher traces of pesticides, although levels almost always remained under legal safety limits.

The definition of a genetically modified organism remains murky at best. The European Food Safety Authority offers one of the more comprehensive explanations: “An organism in which the genetic material has been altered in a way that does not occur naturally through fertilization and/or natural recombination. GMOs may be plants, animals or microorganisms, such as bacteria, parasites, and fungi.”

By this definition, we’ve been modifying our food sources since the dawn of civilization; simply choosing which crops to grow qualifies as genetic modification. While there’s an obvious difference between selecting crops to grow naturally and breeding hybrids in a lab, the basic concept remains the same. Many arguments against GMOs amount to speculation. No studies have shown concrete links between them and bodily harm.

Organic farming offers increased environmental health and longevity, while conventional farming offers efficiency. When comparing the two philosophies data suggests each may be closer to merit than either side would have you believe.

The chart below was translated and reformatted from a Swedish Food Agency study focusing on the environmental effects of organic versus conventional farming techniques per kilogram of output:

The Swedish researchers found that organic and conventional techniques are actually fairly even quantitatively. In fact, conventional methods only win out in four more categories than organic. A significant number of categories show equal results. Conventional farming only has clear superiority in terms of land use, but organic farming has an equally significant superiority in ecotoxicity. Both techniques excel in the area they intend.

The logical next step is to decide whether the efficiency of conventional farming or the ethical cleanliness of organic farming is more important. It may be that we don’t need to choose. The Guardian writes: “The key will be to move away from the hard-line ideology of an organic versus conventional debate and instead examine what features of all agricultural systems could be utilized in a multi-faceted approach, using complementary ideas from each camp.” While it may seem as though we must choose one or the other, the smartest course of action could combine the best parts of each to improve the way we grow food overall.

The Guardian cites a paper published in Nature that supports the idea that both systems could be combined into a new industry that is both efficient and healthy: “In the end, to achieve sustainable food security we will probably need many different techniques – including organic, conventional, and possible ‘hybrid’ systems – to produce more food at affordable prices, ensure livelihoods for farmers, and reduce the environmental costs of agriculture.”

It’s unlikely we’ll find additional farmland the size of California to implement solely organic techniques. Conventional techniques are probably here to stay. With that in mind, the effects of chemicals used on industrial farms should still be studied. Pesticides in the water supply and dwindling bee populations around industrial farms can’t be ignored.

Adopting more eco-conscious techniques like crop rotation into larger operations as opposed to heavy reliance on artificial fertilizer would likely go a long way toward keeping farmland healthy. On the other hand, being organic and sustainable does not mean a mandatory rejection of scientific data and research. It is foolish to reject larger, more resilient produce just because humans rather than nature facilitated the change. Until it is proven that modifying our food sources is harmful, creating higher-yield crops will continue to be a useful technique in the agricultural arsenal.

Improvement can come from both sides. It is especially important that we don’t allow hype from either side to prevent us from listening to reason or innovating. One way or another, agriculture has to put food in the mouths of over 7 billion people. We’re not going to accomplish that by throwing away centuries of agricultural practices nor by swearing off scientific advancements.