As ecommerce continues to grow and adapt to market demands, industries such as online grocery shopping grow with them. And as one of the major drivers of that change, Amazon is looking at rolling out its AmazonFresh program not only within the United States, but in Europe and even Southeast Asia. But what does the future of online grocery delivery look like now?

Just as digital retailing giant Amazon wants to redefine delivery through the use of drones, now it sets its eyes on the burgeoning online grocery delivery market. While its initial efforts have been seen since mid-2007 surrounding Seattle, versions of AmazonFresh have spread to Los Angeles, San Francisco, San Diego, New York City, Philadelphia, Baltimore, Sacramento, parts of London, Boston, and now (just in October), Dallas and Chicago. But Amazon’s fresh grocery delivery program isn’t bound to stop there. In fact, they plan on opening around 2,000 AmazonFresh stores across the United States and sprinkling a few across the globe.

While Amazon Prime Fresh (a predecessor program) had people paying $299 a year for the service, AmazonFresh’s business model shifted in October at a more affordable $14.99 a month as an add-on to Prime membership. Granted, this still averages about $180 for a year’s worth of subscription fees, but it’s a much more flexible model allowing members to opt in or out on a monthly basis, rather than an all-in annual charge. Comparatively, subscribers in the United Kingdom are charged £6.99 a month on top of Prime (which equates to about $8.79 USD at the time of writing); both American and British customers only pay delivery fees for orders under $40 and £40 respectively. 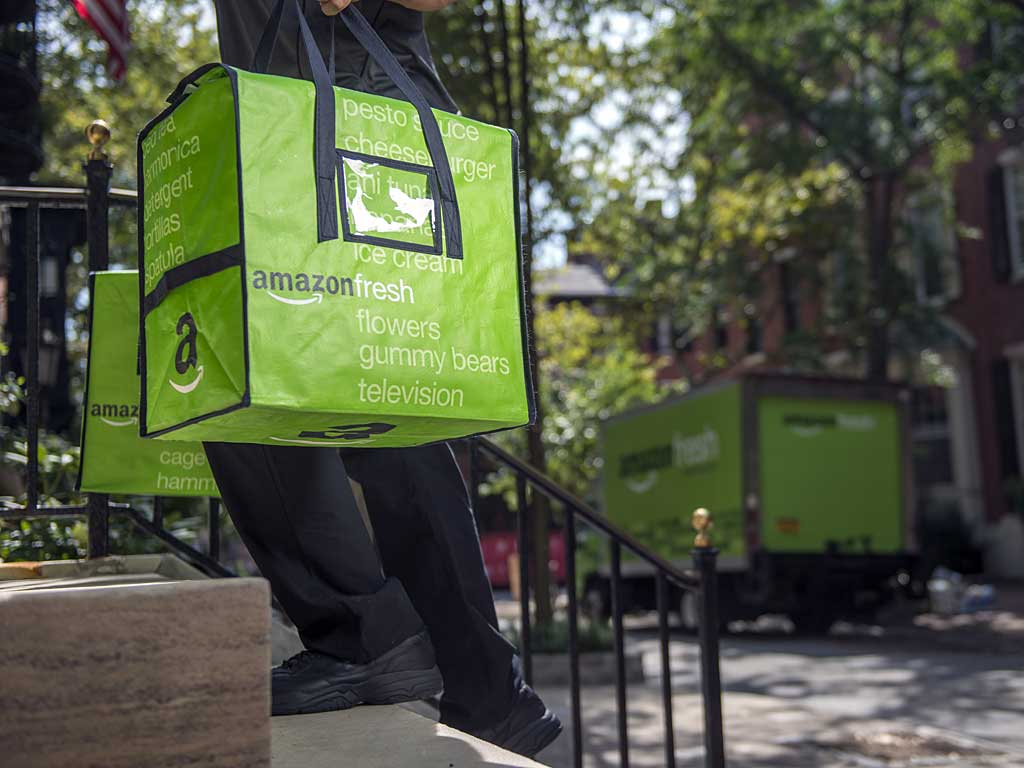 AmazonFresh isn’t just a grocery delivery service; it’s one way Amazon seeks to emerge into the brick-and-mortar realm with physical storefronts and local distribution centers. When AmazonFresh customers order online, they can choose home delivery or to pick up their orders at their nearest location on their way home from work, foregoing any delivery fees on smaller orders. Users can log onto AmazonFresh’s site and put in their ZIP code to find availability of goods and locations nearest them — which seems to vary across cities that already offer the service. But how exactly is this concept going to work?

Emboldened by the success of its physical book retailers, Amazon seeks to now incorporate that model into food service. According to Fortune, Amazon’s playing around with two main ideas: “One concept is a ‘click and collect’ store, where customers can pick up groceries they previously ordered online. The second is similar to a traditional grocery store. […] The company is considered whether or not to make the stores exclusive to members to its grocery delivery service, Prime Fresh.”

Aside from Prime Fresh (the delivery service), AmazonFresh is looking to set up around 20 different test locations in cities such as Seattle, Las Vegas, Miami, and New York to figure out which of the two concepts works best. Though whether or not making the stores exclusive only to members might isolate more of the market than encompass it — unless, of course, it can find ways to be more competitive with other brick-and-mortar food providers who’ve already established themselves over the past few decades.

In addition to its own selection of fresh produce, meats, and other grocery items, AmazonFresh will include both items from its Amazon.com storefront as well as local partner businesses. In Chicago, for example, members can also take advantage from local stores and restaurants such as Local Foods, Irv & Shelly’s Fresh Picks, and Lillie’s Q. From Chicago Business‘ review of the service:

“There are more than 80,000 products for sale. Delivery extends from North Shore suburbs to the far South Side of Chicago, according to [an Amazon] spokeswoman. Customers can select same-day delivery if orders are placed by 10 a.m. If you order by 10 p.m. you’ll receive your groceries by breakfast, according to Amazon’s site, though it does not clarify what time ‘breakfast’ is and the spokesperson could not clarify.”

Amazon also hopes to spread into the Southeast Asian market, making Singapore their beachhead in the region. According to Mashable, Amazon has been “covertly acquiring assets” such as new personnel and refrigerated trucks. Despite its openness on the rest of its AmazonFresh program, Amazon has been rather quiet about its expansion into Southeast Asia, though not without reason. China’s Alibaba is Amazon’s main global competitor has also been making moves to solidify its own claim in the region, most recently acquiring Lazada, a regional e-commerce company.

In For a Fight 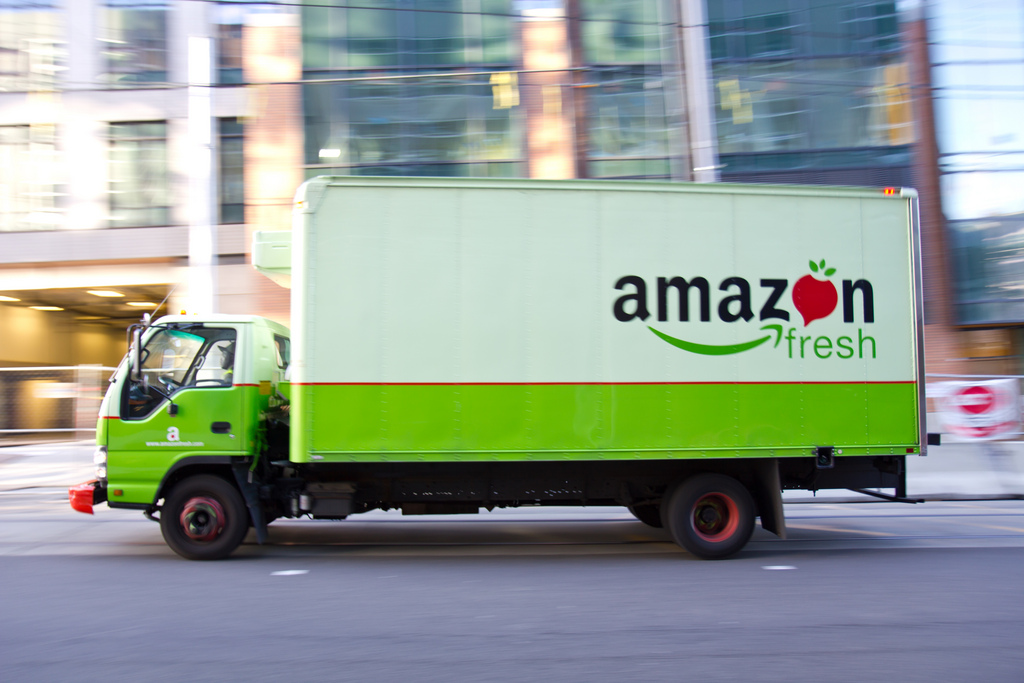 Alibaba isn’t the only competition that Amazon is up against as it rolls out its online/brick-and-mortar grocery store hybrids. With each new store it opens in new metropolitan areas, Amazon has a slew of local grocery delivery services to tackle for a share of the marketplace. In Chicago, companies like Skokie-based Peapod and San Francisco-based Instacart have been serving local customers for years, mastering online groceries while Amazon just gets its feet wet. But even they have been struggling to remain profitable all this time.

“What’s slowing down Amazon from moving into large markets is the cost, the infrastructure, and the familiarity customers have with this type of service,” Darren Tristano, president of Chicagoland food research company Technomic told Chicago Business. “Most consumers understand Amazon Prime, but this is a new way to think about shopping for fresh products and perishables.” He goes on to explain why Amazon’s smaller competition has a hard to thriving, while the digital distributor might have a better time faring:

“The grocery delivery business [in the U.S.] has long proven difficult to do both well and profitably. It requires a lot of infrastructure, including local warehouses and delivery trucks, as well as precision timing in order to deliver perishables successfully. Webvan, one of the first dot-com bust’s biggest failures, filed for Chapter 11 bankruptcy in 2001, just two years after going public at $34 a share. Amazon has addressed the local infrastructure issue recently. It’s gearing up to build several huge warehouses in the Chicago area, and last year it announced it would start using its own truck trailers to deliver goods.”

In northern Texas, however, Amazon must face a number of larger adversaries such as Kroger, Wal-Mart, and CVS Pharmacy, among others. These companies have been offering “specially designated areas of their parking lots” for order pick-up. Moreover, websites such as Blue Apron, Green Chef, and others (depending on region) offer meal plans and ingredients for weekly delivery. “The grocery industry is one of just a handful of retail segments that Amazon hasn’t been able to dominate in the recent years,” the Star Telegram notes. To answer its competition, AmazonFresh might take the form of convenience stores to better compete with curbside pick-up.

With that in mind, Tristano and other food analysts are keen that AmazonFresh’s success will come from Amazon’s “capital and their brand.” Whether or not that’ll be enough remains to be seen.

Online grocery shopping has been a growing trend worldwide, currently estimated at about $48 billion. Where some countries like South Korea have a 16.6 percent chunk of the global market, the United States barely makes it into the Top 10 countries with 1.4 percent. Even within the U.S., online grocery sales account for less than 5 percent of overall grocery sales, though it’s expected to grow to about 10 percent annually — or finding a valuation of about $9.4 billion by 2017.

Phil Lempert, another American food analyst, suggests that AmazonFresh hasn’t accounted for another surging trend in grocery shopping: the rise of convenience stores fresh food options and quality. “You can almost smell the fear of some retailers,” he notes in his critique he wrote for Forbes. “I’m not sure that if Amazon does follow [its] plan that it will be as disruptive and game changing as many predict. I see it as bit more iffy. I’m afraid that Amazon may well be looking at the past iterations of grocery shopping with a few technology whiz-bangs rather than looking to the future, as they try to fill in a niche between two already successful formats that are on the cutting edge.” Even as Millennial and Gen Z shoppers embrace technology and online ordering, they also seek “unique and different” experiences which AmazonFresh might not be able to deliver.

Convenience stores such as KwikTrip, Wawa, and Sheetz have been upping their ante over the past few years, cutting away at the poor image convenience stores seem to have cultivated when it comes to their food selection. “The candy, men’s magazines, beer, and cigarette model is long gone. The C-store environment is cleaner, more contemporary, and has much broader offerings.” Of Sheetz’s 513 stores, about 213 of them offer indoor, restaurant-style seating — not to mention a new store opens every ten days. Ryan Sheetz, the Assistant Vice President of Brand Development attributes a lot of their success to their Millennial consumers:

“Millennials are willing to try new things. They see they can get great food at Sheetz and say, ‘Cool, let’s try it.’ They don’t have the same hang-up as other people who think they can’t get quality food at a gas station because they were once scarred by bad service or crusty nachos. Millennials are very sociable, and we offer them a fun in-store experience to connect with friends over great food. Technology, such as our ordering terminals and WiFi, help too.”

In-store dining has also been spreading to grocery stores as seen with Bellingham, Washington-based Haggen, Whole Foods, and Wegmans, to name a few. Technomic even reports that in-store dining is outpacing traditional restaurant growth and an increase in consumer trust in convenience store food offerings. From their 2016 report, 56 percent of Technomic’s respondents feel that convenience stores are “just as capable as restaurants in offering fresh foods and beverages”; that number creeps up to 67 percent among Millennials surveyed. But convenience stores are just one of two threats to AmazonFresh Lempert mentioned. The second? Small, bare-bones grocery chains.

By that, Lempert means, “European retailers [like Aldi and Lidl] with a smaller footprint that carefully curate their private brands to offer high quality [and] low prices.” German grocer Aldi has already established a presence in over 30 states with over 1,500 stores; Lidl (also hailing from Germany) has set up shop in Virginia, though looks to expand to at least 150 stores by 2018 “with many more to follow.”

What’s going to hit AmazonFresh the hardest is competing for price. Whereas Aldi and Lidl have managed to offer foods anywhere between 40 – 50 percent lower than their competition, AmazonFresh, at present, has been more than or equally expensive to supermarkets it competes with locally. And with its pricing model up in the air (will AmazonFresh be available only to members or even worth the extra $15 a month?), it’s truly hard to say how well Amazon’s grocery program will fare unless it takes all these factors into account.

Where do you think online grocery shopping is headed in the United States? Do you think AmazonFresh is a wilted product before it even ships out? Only time will tell.